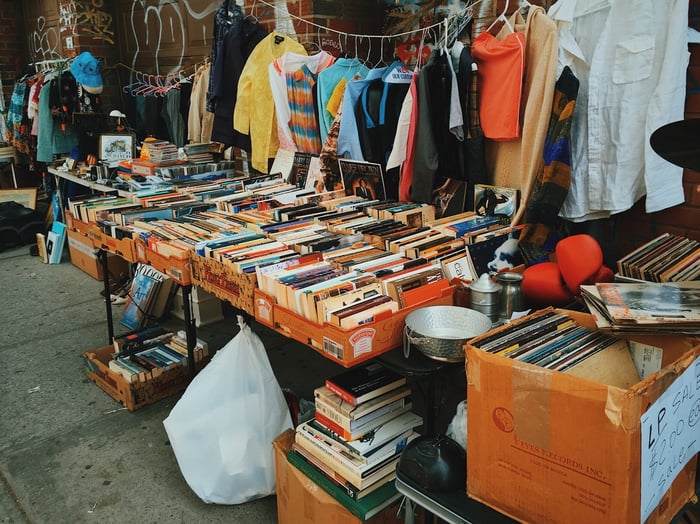 Classifieds and marketplaces are getting better all the time.

Choice is rising, costs are falling, user experiences are improving. Marketplaces now dominate our experience of the internet, perhaps even of life in general. Names like Amazon, Alibaba and Craiglist touch almost every aspect of our lives, often without us knowing it.

But it wasn’t always like this. Online marketplaces have evolved over time from humble origins, transitioning through discrete phases of technological development. Just like how we've evolved, marketplaces have been forced to adapt to changing real-world conditions and leverage bleeding-edge technology in order to gain a competitive advantage and thrive.

A number of distinct evolutionary phases come to mind. First came the Internet, then social media, then mobile. Now platforms are integrating better payment technologies and learning how to leverage AI to better their businesses. In the future, blockchain will play a big role in making platforms safer, faster and cheaper for users. Looking further ahead, technologies like AR and VR will transform the way users interact with platforms, driving a new phase of progress. But let's start back, at the very beginning...

Dawn of the Internet Age

Before the Internet, marketplaces happened offline. The Yellow Pages acted as directory for people to search and book services. Brands sent catalogues to customers and encouraged them to drop into bricks-and-mortar stores to browse and buy products. Of course, this still happens, but more and more commerce is moving online, where marketplaces dominate.

Amazon accounted for 4% of all US retail sales in 2017 and 44% of online sales. The company’s market cap recently hit $730 billion, with speculation that it could become the first ever member of the “Trillion Dollar Club” in the next 12 months. The seeds of Amazon’s success were sowed in the early 90s, when founder Jeff Bezos realised that digital commerce would transform business. Amazon started out by disrupting the traditional approach to book-selling employed by the likes of Barnes & Noble. It tooks books online, and used this as a test bed for other products and services.

Initially, Amazon partnered with distributors and wholesalers to fulfill orders. Later, years before platforms like eBay, Uber and Airbnb started to build two-sided marketplaces,  Amazon created a secondary marketplace where inventory could be bought and sold, allowing it to carry millions of titles and set news standards of choice and convenience. By providing market participants with a platform to do business, Amazon positioned itself to benefit from the growth of others.

Soon other marketplaces were getting in on the action. A company called “The AuctionWeb” was founded in California in 1995 by computer programmer Pierre Omidyar. Its first sale came in the form of a broken laser pointer for $14.83. A perplexed Omidyar contacted the winning bidder to inform the buyer that the laser pointer was broken. The buyer replied, explaining that he was a collector of broken laser pointers. eBay had its origin story. This exchange highlights the elegance and efficiency of marketplaces, which agnostically connects buyers and sellers to facilitate their bespoke needs.

In the late 90s and early 00s, there was an explosion of internet companies, and more marketplaces arrived on the scene. The Dot-com Bubble and crash hit the industry hard, and tenuous companies like Pets.com and Webvan, failed. Cisco’s stock declined by 86%, and Qualcomm was hit hard, but both survived because they were doing something valuable and transformative. Leading marketplaces, such as eBay and Amazon, didn't just survive - they thrived. The crash made them stronger and enabled them to pick over the bones of failed competites and gobble up technical talent.

The next evolutionary phase for marketplaces came with the advent of social media.

Classmates was the Internet's first social networking websites, hitting screens in 1995. There followed a deluge of social network, which still continues to this day. Thought they differ in execution, the vast majority share a concern with connecting people and monetising their engagement. You might have forgotten about Six Degrees, Ryze and Friendster, but you certainly will have come across LinkedIn, which launched May 2003. A year later, Facebook arrived and changed everything.

The platform was launched on February 4, 2004, by Mark Zuckerberg and friends. Initially limited to Harvard students, it soon expanded to include other universities and high schools. In 2006, a seminal moment: the platform was opened to all. In 2012, it went public, and it now has a market capitalisation of over $500 billion.

Facebook is more than a social network. It’s a marketplace for people to exchange words, images, videos and events. Its impact can be felt across the entire classifieds industry. In recent years, more and more platforms have mimicked its approach to UX, design, monetisation and branding. Acknowledging the crossover between social networks and marketplaces, Facebook has now entered classifieds itself with its Marketplace offering.

Marketplaces, which has embraced the Internet and social media to reach more users in better ways, were about to get another shot in the arm. It came in the form of the smartphone.

In the early 2000s, mobile phones had been around for years. But they were clunky and awkward to use. Physical numeric keypads were the norm. Then came the touchscreen, which not only ungraded the user experience but also enabled language speakers all over the world to use the same hardware. In 2007, the LG Prada was the first mobile phone with a large capacitive touchscreen and later that year, Apple introduced the iPhone. Soon after, it opened the App Store, enabling developers to release apps for its hardware. Like the advent of the Internet, this was a seminal moment in the evolution of classifieds and marketplaces, one which would expedite technological progress in numerous, uneviosaged ways. Later, Google's Android operating system and HTC handsets made smartphones even more accessible.

As mobile tech improved and user habits adapted, it became clear that mobile usage of the internet would increase. In late 2016, mobile actually outweighed desktop for the first time. Mobile technology made classifieds portable. Users can access marketplaces on the move, meaning that successful platforms have become adept at identifying the location of users and pushing relevant content. They’ve also had to step up in term of design and UX to ensure that users enjoy a seamless experience which takes into account different hardware platforms and operating systems. This takes time, money and talent - but the rewards are huge.

When you think of online payments, you probably think of our friends at PayPal.

Established in 1998 as Confinity, the company went public in 2002, and became a wholly-owned subsidiary of eBay later that year. In 2015 It was spun out into an independent company. Put simply, PayPal changed the way that people pay for stuff.

The Internet made online marketplaces possible. Social media made them social and immersive. Smartphones market made them omnipresent.

But users are still lacking a convenient but secure way to pay online. What if users could buy and sell securely at the touch of a button, or the tap of a screen? By transforming traditional classifieds into transactional marketplaces, payments can create a whole new business model and an instant new revenue stream - as well as give product managers access to huge volumes of data that can be used to optimised user experiences and drive platform growth. Integrated payments can create a unique and valuable positive feedback loop, so it’s surprising to see that most leading classified sites are yet to integrate payments, forcing users to transact off-platform.

The payments market is now becoming increasingly diverse and competition is on the rise, as new entrants seek to improve how we transact stuff online. Shieldpay is proud to be a part of that, with a unique focus on eliminating fraud, we are promoting trust in classifieds and marketplaces by helping them to help their customers.

Welcome to the future

Marketplaces have come a long way in a relatively short space of time. Now, a gush of new technologies promise to drive yet another wave of innovation.

Blockchain has the capacity to improve the speed, security and scalability of classified in numerous ways, including hosting and payments. There’s a lot of hype and dumb money in play, but the technological foundations of distributed ledger technology are being put in place and it will have a material impact over the years to come. The same goes for AI, which has great promise for classifieds. Machine learning will improve the listing experience for sellers and provide smarter recommendations for buyers.

Further into the future, VR and it’s sibling, AR, promise to upgrade the way users interact with content. Imagine if you could actually see products in context, in your home or workplace? Imagine if you could talk to a sales representative face to face and experience products from the comfort of your own home? VR makes all this possible, and more.

By looking back at the technological evolution of marketplaces, we see that they are really a nexus of multiple technologies. It’s fascinating to observe how different technologies combine to augment and disrupt each other and drive the industry forward.

It has been said that, “It is not the strongest of the species that survives, nor the most intelligent that survives. It is the one that is most adaptable to change.” This is true of organisms, and it’s true of marketplaces. The winners over the next few years will be those who best adapt in order to leverage emerging innovations that improve people’s lives.

Shieldpay’s plug-and-play technology helps classifieds provide customers with a seamless and totally secure payment solution so that buyers and sellers can deal with anyone, anywhere with total confidence!

We’d love to hear your thoughts on the evolution of marketplaces over time and where you think they're headed. Leave us a comment or chat to us on Twitter.

And don't forget - if you want to hear from us a little more often, simply subscribe to our newsletter for daily, weekly or monthly updates - it's up to you!